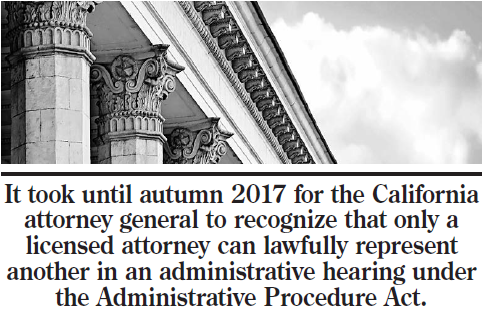 Holding a drill does not make someone wearing a white coat a dentist. Dressing up in a sailor’s suit doesn’t qualify anyone to captain a freighter through the Dardanelles. A suit, tie and brief case doesn’t enable an unlicensed consultant to try an administrative hearing.

When Abraham Lincoln mused, “He who represents himself has a fool for a client,” he was probably contemplating how ill-advised it is for an unlicensed person to represent himself or others in an administrative hearing before an Administrative Law Judge of the Department of Alcoholic Beverage Control in California. Ill-advised or not, individual licensees who wouldn’t dare to appear alone in Court in an $11,000 (above the Small Claims limit) personal injury or contract dispute, blithely walk into an ABC administrative hearing where his/her license to sell alcohol is at stake. Loss of that license could dictate the collapse of the valuable business enterprise that was predicated on continued alcohol sales. 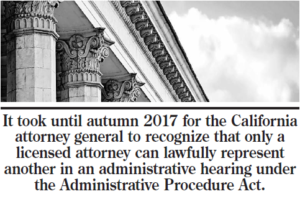 We start with the premise that unless licensed as an attorney, no one is legally authorized to represent another except where statute explicitly permits it.

“We conclude that the Administrative Procedure Act does not, in itself, authorize a party to be represented in an administrative hearing by a person who is not an active member of the California State Bar.”

An early question which must be answered is whether the appearance in an administrative hearing constitutes the practice of law. The Attorney General seems to say it does.

This realization came swiftly on the heels of the now forty-seven year old Baron decision.

In Baron v. Los Angeles, 2 Cal.3d 535, 543 (1970), the California Supreme Court reviewed a Los Angeles city ordinance which required lobbyist registration with the city clerk. The Court upheld the city ordinance stating that lobbying city agencies was not the practice of law, so state bar rules did not preempt the ordinance.  In its review, the Court defined practice of law as follows:

“In close cases, the courts have determined that the resolution of legal questions for another by advice and actions is practicing law “if difficult or doubtful legal questions are involved which, to safeguard the public, reasonably demand the application of a trained legal mind.” (Id. at p. 818; see also Zelkin v. Caruso Discount Corp. (1960) 186 Cal.App.2d 802, 806 [9 Cal.Rptr. 220]; People v. Sipper (1943) 61 Cal.App.2d Supp. 844, 846-847 [142 P.2d 960].) Less perplexing is the determination of whether participation on behalf of another in hearings and proceedings before a board or commission constitutes the practice of law. The cases uniformly hold that the character of the act, and not the place where it is performed, is the decisive element, and if the application of legal knowledge and technique is required, the activity constitutes the practice of law, even if conducted before an administrative board or commission. (Annotation, What Amounts to Practice of Law (1937) 111 A.L.R. 19, 32.)”

So, from Baron we see it matters less the forum where the activity takes place and more upon the level and degree of expertise required to perform.  The Attorney General now tells us that in defending or prosecuting an administrative hearing, the Administrative Procedure Act does not authorize a party to be represented by an unlicensed person.

Under the Baron reasoning and this Attorney General opinion it appears that an unlicensed person representing another in an administrative hearing is practicing law without a license. Business and Professions Code § 6126 makes that a misdemeanor with a $1000 fine and one year in county jail. Taking this issue into the world of Alcoholic Beverage Control hearings we see any number of licensees ignoring Abraham Lincoln’s admonition by representing themselves in adversarial disciplinary hearings. Make no mistake, these hearings are serious and may yield devastating conclusions. Certain Alcoholic Beverage Control licenses have serious intrinsic market value. The licensed business itself can be valued from hundreds of thousands of dollars to millions of dollars. Some ABC hearings affect multiple locations held by one licensee. All these licenses could be revoked in one proceeding.

Moreover, as part of the application process to obtain an ABC license, an administrative hearing may be required before that application can be approved.

Another opportunity for this issue of representation to surface is in such protest hearing where an applicant for a license faces formal opposition from any number of sources: neighbors, neighborhood associations, local government, local law enforcement and even the ABC itself. Until now, it has not been unusual for a protest group to designate an unlicensed representative from the protest pool to speak and act as counsel on behalf of the group.

It should be noted, if only for contrast, that the Attorney General acknowledged that the legislature has enacted statutory permission for lay representation in certain administrative proceedings, such as Victim Compensation, Gambling Control, Air Resources Board and several others enumerated.

Another exception was created by the Court and not the legislature and is found in Caressa Camille Inc. v. Alcoholic Beverage Control Appeals Board 99 Cal.App.4th 1094 (2002). In Caressa, the Court of Appeal in a case of first impression faced this issue:

“The issue presented is whether a corporate licensee appearing as a party in an adjudicatory administrative hearing is entitled to be represented by a nonattorney officer of that corporation. The parties to the instant writ proceeding have cited no California statutory or case authority on point, and we are aware of none.”

“We hold that the general common law rule requiring corporations to be represented by counsel in proceedings before courts of record other than small claims courts does not extend to proceedings before administrative agencies and their tribunals.”

The Court reasoned that the administrative tribunal did not need a high level of expertise as would be provided by counsel since the proceedings are informal in nature.

From Camille, corporate officers may represent their own corporations in ABC administrative proceedings. There frequently are highly complex legal issues at play in Alcoholic Beverage Control cases. Under the Administrative Procedure Act rules of evidence do not apply in the same manner as in judicial proceedings, but there are evidentiary rulings that nevertheless might invite and require sophisticated constitutional questions and constructs that can only be ultimately resolved by discretionary writ to the Court of Appeal or California Supreme Court. If the groundwork is not laid at the administrative hearing, the issues may be lost and never heard in an appellate judicial forum.

Not only does Camille still apply today, but in Davis Test Only Smog Testing v. Department of Consumer Affairs 15 Cal.App. 5, 1009 (September 2017), the Court of Appeal, Third Appellate District took the Camille concept and extended it to allow representation by persons who were once but no longer are officers of the corporate licensee. The Court in Davis stated:

“We recognize that the current case is unlike Caressa Camille because the record does not support a finding that [representative] McGarry was a current corporate officer, or even a current employee, for that matter, when he represented Star Smog at the administrative hearing. Nonetheless, Caressa Camille is instructive because it establishes that principles relating to representation in a court of law do not necessarily apply to administrative proceedings.”

So while the Attorney General has answered the question that lay persons cannot represent others in administrative proceedings, apparently that does not apply to lay representatives of corporate licensees.

“The State Bar hedges its bet on the question. In its brief, it assumes for the sake of argument that laypeople may represent parties in state administrative hearings. But it also directs our attention to the Medical Board’s amicus curiae brief filed below, which contended that laypeople have no such right. The Medical Board relied primarily on Government Code section 11509.  This statute requires agencies to notify parties that they “have the right to be represented by an attorney at [their] own expense,” but makes no mention of any right to be represented by a layperson. It also relied on other APA sections referring to a party’s attorney without mentioning any other kind of representative. It contends that the APA sections and regulations mentioning “authorized representatives” or “other representatives” should be construed to refer to corporations, who have the right to represent themselves in agency hearings and must do so through a natural person: i.e., a “representative.”

The Benninghoff court only went as far as disallowing a disbarred lawyer from practicing law and went no farther only making the assumption that lay people can represent parties in administrative hearing and moving to resolve the single issue of disbarred lawyers. The court noted:

In trying to reconcile the two apparently conflicting positions, it is abundantly clear that the level of complexity in these respective hearings is not necessarily different in one circumstance from the other. The dangers lurking in the results can be identical. In either instance, losing the administrative case could translate to loss of a major business or opportunity to conduct a major business with the attendant loss of income, employment of a work force, and losses affecting innocent investors.

At this point, it’s up to the Alcoholic Beverage Control and other similarly situated state agencies to approach the Attorney General’s conclusion as mandate or procedural guide and react accordingly.

Does Attorney General Opinion No. 14-101 settle questions of law or generate further need for judicial review?

At this moment, one can peer into the present workings of state agencies to see how the Attorney General opinion will or won’t change the nature of administrative proceedings. Where an ABC ALJ would once say, “Is there a spokesperson here to represent the protest group?” This could change to, “As anointed spokesperson for the protest group, you should be aware of the criminal consequences of practicing law without a license.” We’ll see.

“What is going to happen to T.V. Advertising if Beer Sales continues to drop...Constitutional Law: Taxes, Guns & Privacy: We Need A Pardon!
Scroll to top