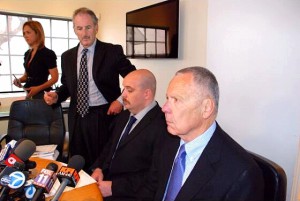 An ex-bouncer who claims he heard the phone call that drew Fullerton police officers to their fatal encounter with Kelly Thomas said Wednesday that the call was bogus and he lost his job fighting it.

Michael Reeves was working the door at the Slidebar Rock-n-Roll Kitchen on the night half a dozen officers took down Thomas, an unarmed, mentally ill homeless man who frequented the area. He claims in a lawsuit that a manager at the Slidebar falsely reported that Thomas was trying to break into cars, setting in motion the events that led to his death.

Slidebar owner Jeremy Popoff confirmed this week that one of his employees did call police that night from her cell phone. He declined to say what she reported, citing the criminal investigation into Thomas’ death, but said a recording of the call has been reviewed by the District Attorney’s Office and other investigators.

Neither Popoff nor the manager named in Reeves’ lawsuit has been charged with filing a false police report, court records show.

Reeves appeared Wednesday at a brief press conference in the Playa del Rey office of his attorneys. He read a short statement and then sat quietly as his attorneys answered questions. “I heard (the manager) report that Kelly Thomas was in the parking lot breaking into cars,” he said in his statement. “I knew her report to be false.”

The Slidebar fired Reeves in September; its attorney says he confronted a manager in front of customers. He claims he was fired for complaining about the police report and talking to the District Attorney’s Office about it. He filed suit late last week, demanding at least $4 million for lost wages and emotional distress, and to punish the Slidebar.

Reeves says in his lawsuit that Thomas was doing nothing more than picking up cigarette butts outside the Slidebar. He claims the Slidebar had a policy of keeping homeless people like Thomas away – a claim Popoff and his attorney refuted as absurd and insulting.

Reeves’ lawsuit claims that the manager who called police that night ensured a quick response by reporting that Thomas was trying to break into cars. Responding officers arrived on scene thinking there was a crime in progress, he says, not just a loitering homeless man.

“Mr. Reeves heard what he heard,” said Stephen Warren Solomon, one of his attorneys. “And he was terminated for doing the right thing.”

An outside investigator hired by Fullerton to look into the events leading up to Thomas’ death included a recording of that initial phone call in his review. The investigator, Michael Gennaco, reported that the caller told a police dispatcher that a man she identified as “Kelly” was roaming the parking lot, looking into cars and “pulling on handles.” Gennaco did not identify the caller in his initial report.

Police have said officers stopped Thomas as they investigated a car break-in report, and that he struggled when they tried to arrest him. A surveillance video captured two officers tackling and then wrestling with Thomas; four other officers join them and hold Thomas down as some officers hit him and at least one shocks him with a Taser.
Thomas died of chest and head injuries five days later. One of the officers, Manuel Ramos, has been charged with second-degree murder. Another, Jay Cicinelli, has been charged with involuntary manslaughter.